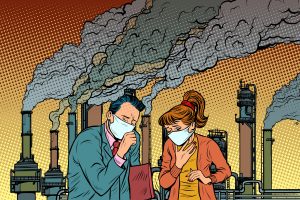 It was introduced in the 1970’s to kill weeds by targeting enzymes that produce certain amino acids.
The use of glyphosate has increased since the introduction of genetically modified (GMO) foods. The lab says, “Studies have also indicated that glyphosate disrupts the microbiome in the intestine, causing a decrease in the ratio of beneficial to harmful bacteria. The relationship between the microbiome of the intestine and overall human health is still unclear, but current research indicates that disruption of the microbiome could cause diseases such as autism, metabolic disorder, diabetes, depression, cardiovascular disease, and autoimmune disease.”

Research has shown other issues with glyphosate like cancer, “In 2015, the World Health Organization reclassified glyphosate as probably carcinogenic to humans.” https://pubmed.ncbi.nlm.nih.gov/29117584/. From article entitled Environmental and health effects of the herbicide glyphosate
Gut dysbiosis caused by Glyphosate research says, “Consequently, researchers have suggested that Gly can cause dysbiosis, a phenomenon which is characterized by an imbalance between beneficial and pathogenic microorganisms. The overgrowth of bacteria such as clostridia generates high levels of noxious metabolites in the brain, which can contribute to the development of neurological deviations.” https://pubmed.ncbi.nlm.nih.gov/31442459/ from article Gut microbiota and neurological effects of glyphosate.

Since we eat primarily foods low in chemicals in general, we have found it a bit odd that glyphosate would be so high on Jessica’s lab test. We just recently sent our water to get tested by the lab to see if a high amount may be coming from that. We also have stopped eating so many organic meats so the food the animals eat may not be organic and fully chemical free. Meat can have a lot of toxins.

This statement from a blog called The Plant Way.com was interesting because I would not think of glyphosate in so many different junk foods. If you think glyphosate is a big non-issue, listen to what they have to say, “Many types of foods have been tested positive for glyphosate contamination. Some products have been found to exceed the safe limit of 700 ppb set by the Environmental Protection Agency.

Some popular cereals, including varieties of Cheerios, contain glyphosate, as well as the following products: